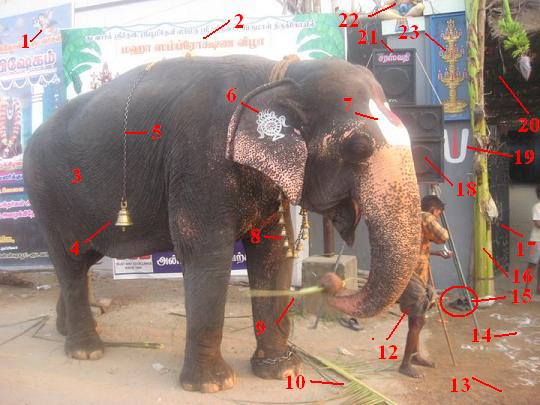 That is a picture of the typical front yard of a village temple in Tamil Nadu, South India. See if you can relate to what I observe in those marked parts

1) Painting of an angel with a garland; a Christian concept, as I understand, but seen in this advertisement board that proclaims the ongoing temple festival.

2) It reads in Tamil, maha samprokshana vizha translated as Big Consecration Festival. Interestingly, the words maha and samprokshana are not Tamil but Sanskrit, but written in Tamil and understood by common man.

3) Elephant of course; Indian one; notice the small ears when compared to the African ones.

4) Bronze bell – there is a saying in Tamil that goes the sound of its bell is heard before the elephant arrives. The clang of the bell on an elephant is to be heard to be appreciated; the clang accurately portrays through sound, the gait and stide of the elephant that carries it.

5) Iron chain, so that the bell doesn’t roll off the elephant body even when its in a hurry.

6) The ear is marked with a chakram – the protective weapon of Vishnu, a Hindu God. The marking is done with thiruman – white calcite. The other ear would have an inscribed conch, the other object carried by Lord Vishnu.These two symbols proclaim the elephant belongs to a Vaishnavite temple. The Shaivaite ones have three horizontal lines made using holy ash and a symbol of trishul – trident – the weapon of Lord Shiva.

7) The forehead is inscribed with the namam – a vaishnavite symbol. This form – an U shaped white curve with a central red line identifies the vadakalai or northern-clan of the followers of Ramanuja, the originator of visistadwaitham. The other thenkalai southern clan of visistadwaitham identifies with a Y shaped white curve with the central red line – called a Sricharanam.

8. Smaller bronze bells; interestingly, the elephant with a command from the mahoot, can hold these bells with its trunk and walk ‘silently’ when required.

9) and 10) Green leaves from the coconut tree; a staple food for the elephant. It can lift its trunk and pluck the branches directly from the tree.

11) notice the bare legs of the mahoot (without slippers or shoes); a common sight among villagers. No, they are not too poor to afford a slipper (which is true with many) but many prefer to go bare legs; reasoning is that they get used to the mud and nature so that they don’t require separate antibodies to be injected into them to counter certain diseases. I wear slippers even inside my house.

12) Lungi worn in dappa kattu. Let me see if I can do this with a straight face; it is a strip of connected cloth looking like a cylinder. At the start the cylinder diameter is much larger than your waist diameter. You get in and fold the ends of the cylinder over your waist in the radial direction; then for walking ease you fold the now snug fit cloth stip in the axial direction and again do a radial fold-fold and knot; this is dappa kattu or box-wear with your boxers peeking underneath that turns the cloth strip into a Mobius strip.

This dappa kattu is actually a village fashion. Villagers can identify your status – bad guy, rough guy, village bigwig etc. – by a look at your peeking underwear.

13) Ground sprinkled with water. This is a tradition that is carried out even today in the villages and until recently when there were separate houses in the cities. The reason is two fold: sprinkling water settles the dust on the (sand) road and it keeps your front yard a bit cooler.

14) Padi Kolam. There is a general crib amongst villagers who got educated in higher math that Kolam is hijacked by Knot Theorists under publication duress. Kolams are complex designs made on the ground in front of each house in a typical South Indian village as a form of decoration. That the kolam is done with rice flour is to give food for the ants and insects is a hidden goodwill.

15) Sandals. To leave one’s sandals outside one’s home is another South Indian tradition – obviously, to keep the inside clean of the outside dirt. In Temples in particular, to wear a shoe inside is sacrilegious. You will be manhandled by anyone present – theist, atheist or agnostic. Even today. Following this tradition partly, nowadays, outside of rooms with computers we keep notices that read with an inadvertent nevertheless creative mispelling, ‘leave your footware outside‘.

16) Vazhai maram. A full grown plantain tree, literally uprooted and planted in front of the gate (there will be another one on the RHS). This is another tradition that symbolizes there is a festival in that house. In this instance, the Temple is being consecrated.

17) Iron grill gate. This is an anomaly for a traditional temple. the front yard of temples are usually left unprotected so that passerby can come in and relax. Times they are a changin‘

18) Speakers. It will holler for three days and nights all hymns, recitals and pious songs delivered during the festival. Large nuisance value worth the invested lending money. Everyone in the village knows what is going on in the Temple. There is a traditional saying that it is hard to keep anything secret in a small village.

19) The vadakalai namam mentioned in 7)

20) Dried coconut tree branches weaved as a roof. Such a roofing is not completely rain or cyclone proof but certainly very cool for summer. This is an age old green technology waiting to be patented by the canny and resold for stash to the same villagers. Any takers?

21) The electric speakers carry the name of Goddess Saraswathi (written in Tamil) perhaps for its proper functioning (Saraswathi is Goddess of Education).

22) Half of a statue of a Protection God. Usually in vaishnavite temples it will be a Garuda – a giant mythical condor in human form. Look below for a picture.

23) That is a painting of the kuthuvilaku – a traditional multi-tiered lamp lit on auspicious occasions. Here electric serial lights substitute the traditional oiled wicks.

That completes a quick survey of a random slice of the invisible India. Mind you, we are yet to enter that village temple or the village.

Of course, the visible India that everyone understands immediately and have an intelligent opinion about can be grasped by watching The Slumdog Millionaire.