Phenomenon is a word that is almost an antonym to itself. In Science it means an observable event; an occurrence with perhaps no special significance that needs to be analyzed using logic and reason. However, in popular usage it means an extraordinary event perceived directly by the senses without having to use logic or reasoning, evoking feelings that oscillate between astonishment and wonder. An example for its Science usage is the Supernova. An example for its popular usage is the music of Ilaiyaraja. 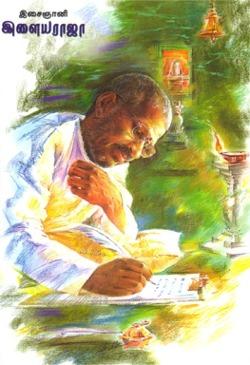 When he started creating Tamil movie music in the 1970s [see first note below], Ilaiyaraja’s grip on several music forms, from folk to Carnatic to Western classical, his blend of these into a multi-layered music having voice as one of its components was different to Tamil filmdom and populace.

As a sequence of pleasing sounds, Ilaiyaraja’s composed music is ‘continuous’. One can imagine all musicians continuously perform their designated part of the tune, while chosen sections of their individual musical parts are made audible to us by the precise wave of the Maestro’s baton. The continuous flow of music from the instruments smoothly transcend to singing which is often punctuated with brilliant counterpoints from the instruments until the interlude. In each song, the singers are just part of the whole music – periods of human voice – that is befittingly knitted into the entire musical tapestry.

Here is an early example from his compositions.

The song is AgAya gangai from the movie dharma yudham. The lyrics doesn’t matter, if you can’t follow Tamil. Listen to the combination of instruments and voices, sections of which reach the foreground providing the main melody that we listen to and after a while recede to the background still playing something as a fresh set of instruments play another section of the melody in the foreground. Sometimes even non-percussion instruments including voices serve to keep the song’s main rhythm while the interludes are served with altogether a different rhythm. All components of a Western Classical music system.

Majority of the Western classical music composition is done in creative isolation, unlike the Carnatic classical music. Although the krithi is composed in blissful seclusion, much of the associated creativity is necessarily displayed extempore and valued on stage in a kutcheri. Ilaiyaraja’s multi-layered music often resembles the Western Classical composition. The Tamil filmdom requirement of studio recorded versions of songs, well suited this composition style. The unique talent of Ilaiyaraja is in the pleasing marriage of South Indian folk and classical music ragas as basic scales for his melodies that subsume components of a standard Western Classical composition. An unique phenomenon directly perceivable by the senses of the appreciative common man, raising him to connoisseur-ship.

In South Indian Classical (Carnatic) music system a krithi or a song usually has three parts: pallavi (beginning stanza), anupallavi (the next stanza) and charanam (concluding stanza(s)). In Western Classical music, be it a concerto or a symphony, sections of music can be identified as allegro (fast paced), andante (slow paced), moderato and such. Minor variations and other components exist in krithis just as several other elements and tempos exist in symphonies but what I mention here suits the essay’s purpose. In a typical Ilaiyaraja tune (movie song) one could observe all the above musical elements seamlessly merge.

A Tamil film song usually contains a pallavi, an anupallavi and a charanam with an interlude apiece in between the three. Ilaiyaraja holds to this structure and in the two interludes brings in the Western classical music components. A typical first interlude of Ilaiyaraja would be very different to what the pallavi (or the main) tune is. The entire interlude would seem as if a second tune out of the chosen (Carnatic) scale for the original tune. Such stark yet itch less contrast is apparent in many songs where even the basic percussion beat of the start and pallavi is changed to something else or nothing in the interlude. The percussion instruments also are different – Sivamani or synthesized drums giving way to an Anjaiah thavil or group of tablas. The anupallavi or the stanza after the first interlude reverts to the pallavi rhythm, Sivamani and all. The second interlude typically keeps the pallavi percussion and tune but does a variation of that theme. Often, the end of the first or second interlude would purposefully slow down the tune (if it is set in allegro, allegro asai, presto or moderato originally) to sneak in an andante. There would even be scope for a prima donna with a melancholic strain, especially when the pallavi or song is upbeat.

Scores of examples exist to illustrate this structure for a patient listener to verify including the AgAya gangai song given above. Listen to it again; the percussion-less rhythm in the interlude culminating into a short melancholic andante contrasting with the upbeat charanam that follows.

Another song that comes to mind as an example is the pUngathavE thAzthiravAi song from nizhalgal film. It doesn’t matter if you can’t follow the Tamil lyrics. It is better in a way. Listen to the music, the song structure and the interplay of instruments as a whole.

The above structure and grandeur is omnipresent in Ilaiyaraja’s music. Tune after lilting tune, year after maturing year, songs created for mundane movies that run into hundreds.

Madai thiranthu [listen here], the other song from this film again has the above song structure with additional mesmerism in the interludes from the voice, chorus and seamless merging of bellows-harmonium, guitars and drums – an example of Tamil village folk tunes embellished with Western structure and instruments.

Another song in nizhalgal film, ponmAlai pozhuthu brings out the essence of the Carnatic rAgA kEdAram right in the first line of an enjoyable tune.

That the character in the movie that mouths this song with imaginative lyrics is a jobless ganja-case (drug addict) who attempts suicide for his love failure is my incomprehensible Tamil filmdom irony discussed in the next section.

[*] Ilaiyaraja has composed music for more than a thousand movies. It is impossible to write a single article that does justice to the entire musical phenomenon, introducing and saluting his music while also satisfying the expectations of his fans. Hopefully this essay serves as an introduction to those who are yet to explore his music.

A much more elaborate attempt was already made by my Srirangam friend Lakshminarayanan a decade back in the internet. Titled Classical Ilaiyaraja, the fifteen part essay among other places is also preserved at the unofficial Ilaiyaraja home-site.

[**] All the songs and music used here are only for illustration purpose. There is no download link provided.

[***] Thanks to Vijay for the pUngathavE and ponmAlai pozhuthu song.